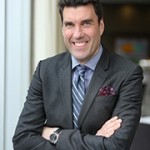 19 years after joining Centre Mont-Royal’s founding team, Luis Ribeiro is now general manager of the iconic Montreal venue. We reached out to learn his plans and discover what’s next for the city’s premier event destination.

Now that you’ve had a few months to settle into your new role, what’s on your radar?

My priority as general manager is to keep the Centre steady and moving in the right direction, which our team has been doing successfully for the last 19 years. My job is to stay the course, keep finding ways to distinguish ourselves among event planners and deliver the calibre of service and experiences that we’ve become known for.

Aside from a new name at the helm, what’s next for the Centre Mont-Royal?

The theatre remains the star of the Centre and we’ll be taking it to another level with a modern renovation that would make it more adaptable to a broader range of events.

In the first 20 years we’ve become a staple in the meetings market and have hosted Forbes 500 companies, prime ministers, presidents, premiers, and artists from all genres, and hope to continue being the venue that adapts much like a chameleon to the needs of any group, large or small.

You’ve been in the industry for nearly two decades. What trends do you see emerging in the meeting and events space?

There’s always something new on the horizon, and we’re always evolving with our guests. As for the most significant trend right now, it would have to be the new and changing technologies. I’m talking about the high-speed wi-fi, cutting-edge screens, interactive displays, conference apps, and live-streaming technologies that are transforming the way people interact at events. Event technologies have changed drastically over the years, and it’s not stopping.

That said, while these technologies have definitely changed the dynamics of the conferences and events we host, I don’t see them ever replacing the need for face-to-face interactions. Sure, you can webcast your conference to people around the globe now, but nothing replaces the “human factor” or the value and importance of real, one-on-one interactions. That’s when the real work gets done.

Other than technology, we’ve seen guests become much more specific about their food restrictions. Five years ago, we may have had a handful of people in a crowd of 500 with an allergic reaction we needed to account for, but now it’s common to have anywhere up to 100 guests come to us with specific food requests. For us, that means making sure we’re working with the groups in advance to gather those details and then making sure those requests make it to the plate. While we address challenges in food sensitivity categories, our commitment is to maintain a high standard in the food and beverage department so that every guest walks away pleasantly satisfied, having had a memorable meal. Often, the meals are the best part of the day and a great part of why groups keep coming back.

How does it feel stepping into the new role?

I’m very grateful. This is a unique place to work, for one. We are a standalone convention, conference, and special event center in the heart of downtown Montreal and I genuinely believe we offer a venue and experience like few others do.

Being here since the beginning, I’ve had a chance to mentor under our previous general manager, learn this Centre inside and out, and understand what makes it great. I’ve also been lucky to have worked with an incredible team over those years, and inherit them in this new role. We have a big reputation to uphold, so it’s both an honour and a challenge to be the one leading Centre Mont-Royal into the next chapter.