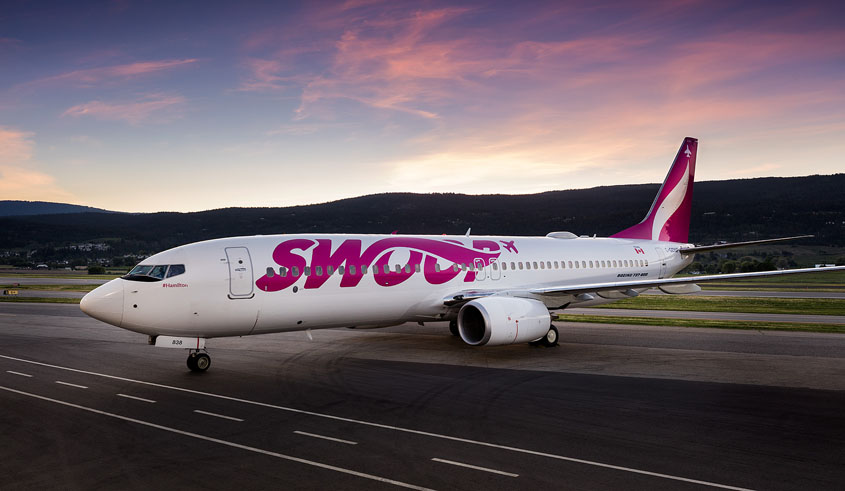 Swoop is set to grow its fleet from 10 to 16 aircraft with the acquisition of six new Boeing MAX-8 aircraft. Canada’s fast growing ultra-low-cost carrier (ULCC) confirmed it will begin receiving all six aircraft this summer as the airline rapidly expands to meet peak season travel demand.

“We saw demand for travel return in a very meaningful way over the holidays, signalling that Canadians are ready to reunite with family and friends,” said Bert van der Stege, head of commercial and finance, Swoop. “The acquisition of six new aircraft in response to anticipated demand will ensure Swoop reconnects more Canadians this summer while accelerating Canada’s economic recovery.”

The expansion will bring the ULCC’s total non-stop domestic routes served to 37 this summer and includes a significant investment in Atlantic Canada.

Swoop’s investments in Atlantic Canada will see the airline begin service at three new destinations while increasing capacity across the region by 273 per cent compared to pre-pandemic levels.

“Swoop is pleased to support Newfoundland and Labrador’s Come Home 2022 campaign and stimulate recovery of the visitor economy with access to affordable air travel,” said van der Stege. “We know how important the re-opening of travel and tourism is for regional economic recovery and continue to call on the federal government to outline a roadmap for the recovery of air travel that is based on science and reflective of the current realities of the COVID-19 pandemic.”