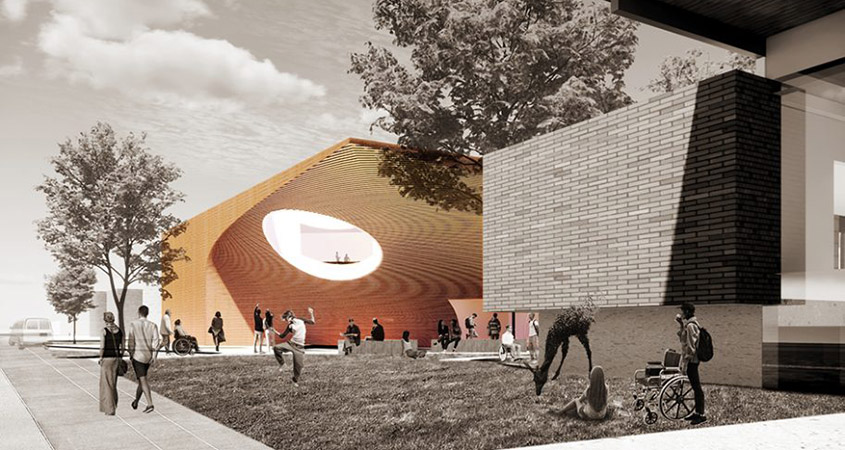 Designs for a new $12 million disability arts venue in Calgary have been unveiled by the National accessArts Centre (NaAC).

Conceptual drawings and plans have been developed by Dialog, a previous collaborator with NaAC. The facility will include an art gallery, cafe, performance venues and outdoor gathering spaces.

A multidisciplinary studio space will make up the heart of the building that will also feature a protected roof terrace, open office administration space for the 46-year-old organization, and a lower terrace that extends the building into an existing plaza ideal for small-scale public gatherings.

“This is a groundbreaking project for Calgary and puts our city on the map for yet another spectacular reason,” says NaAC president and CEO, Jung-Suk Ryu. “Every city has a performing arts centre, a museum or an art gallery, but Calgary will be the only city with infrastructure dedicated to the needs and talents of artists living with disabilities.”

NaAC says it hopes to secure support through the Government of Canada’s Green and Inclusive Community Buildings program, which can potentially unlock 60 per cent of the project’s eligible costs. When green-lit, the project will move into subsequent phases of development, including the approval process through the City of Calgary, which owns the land.

“We are optimistic that the federal government will come on board,” says Ryu. “This project will not only add jobs through the construction process but it aligns so perfectly with the sought-after outcomes around green and inclusive infrastructure outlined in this particular funding program.”

According to NaAC, the new building, in addition to the former Scouts Canada building, will realize a vision for a disability arts training and presentation campus — the first of its kind in the world.

Construction is slated to begin later this year.